AUTHOR: Todd Ewing (based on work by Elaine Meng and Brian Shoichet)

Originally released with DOCK 4. Also used by DOCK 5 and DOCK 6.

Grid creates the grid files necessary for rapid score evaluation in DOCK. Two types of scoring are available: contact and energy scoring. The scoring grids are stored in files ending in *. cnt and *. nrg respectively. When docking, each scoring function is applied independent of the others and the results are written to separate output files. Grid also computes a bump grid which identifies whether a ligand atom is in severe steric overlap with a receptor atom. The bump grid is identified with a *.bmp file extension. The file containing the bump grid also stores the size, position and grid spacing of all the grids.

The grid calculation must be performed prior to docking. The calculation can take up to 45 minutes, but needs to be done only once for each receptor site. Since DOCK can perform continuum scoring without a grid, the grid calculation is not always required. However, for most docking tasks, such as when multiple binding modes for a molecule or multiple molecules are considered, it will become more time efficient to precompute the scoring grids.

NOTE: The following parameter definitions will use the format below:

Prior to scoring, each orientation can be processed with the bump filter to reject ones that penetrate deep into the receptor. Orientations that pass the bump filter are then scored and/or minimized with any of the available scoring functions. A bump is based on the sum of the van der Waals radii of the two interacting atoms. The user specifies what fraction of the sum is considered a bump. For example, the default definition of a bump is if any two atoms approach closer than 0.75 of the sum of their radii. Grid stores an atomic radius which corresponds to smallest radius of ligand atom at the grid position which would still trigger a bump. During docking, for a given orientation, the position of each atom is checked with the bump grid. If the radius of the atom is greater than or equal to the radius stored in the bump grid, then the atom triggers a bump. To conserve disk space, the atom radius is multiplied by 10 and converted to a short unsigned integer.

NOTE: The following parameter definitions will use the format below: 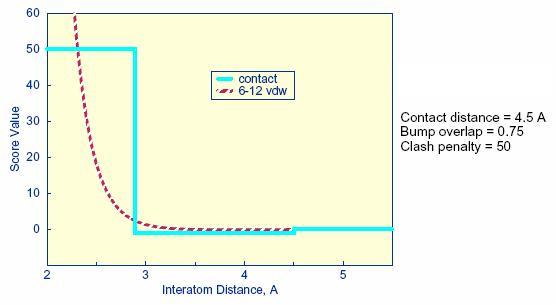 Contact scoring in grid incorporates the scoring performed with the DISTMAP program (developed by Shoichet and Bodian). The score is a summation of the heavy atom contacts (every atom except hydrogen) between the ligand and receptor. A contact is defined as an approach of two atoms within some cutoff distance (usually 4.5 Angstroms). If the two atoms approach close enough to bump (as identified with the bump grid) then the interaction can be penalized by an amount specified by the user.

Generalization of the VDW component

Precomputing potentials on a grid

By inspection of the above equations , the repulsion and attraction parameters ( Aij and Bij ) for the interactions of identical atoms can be derived from the van der Waals radius, R, and the well depth, e.

In order to evaluate the interaction energy quickly, the van der Waals and electrostatic potentials are precomputed for the receptor and stored on a grid of points containing the docking site. Precomputing the van der Waals potential requires the use of a geometric mean approximation for the A and B terms, as shown:

Using this approximation, the first equation can be rewritten:

Three values are stored for every grid point k ,each a sum over receptor atoms that are within a user defined cutoff distance of the point:

These values, with trilinear interpolation, are multiplied by the appropriate ligand values to give the interaction energy. Grid calculates the grid values and stores them in files. The values are read in during a DOCK run and used for force field scoring.

The user determines the location and dimensions of the grid box using the program showbox (see showbox). It is not necessary for the whole receptor to be enclosed; only the regions where ligand atoms may be placed need to be included. The box merely delimits the space where grid points are located, and does not cause receptor atoms to be excluded from the calculation. Besides a direct specification of coordinates, there is an option to center the grid at a sphere cluster center of mass. Any combination of spacing and x, y, and z extents may be used.