Docker is required to run the aws-setup scripts. https://www.docker.com/get-started/. You can install docker desktop to your personal machine, or log on to a machine where docker is already installed.

On a linux/mac/windows computer with docker or docker desktop installed, run the following commands in a terminal:

It may be necessary to give the container additional privileges. When you enter the image, test this with the following command:

If you get a permission denied error, exit the container and run again with the --privileged option enabled:

The container uses the ubuntu distribution. Some utilities such as curl and vi are installed so you can download files and edit them. You can also install whatever software you like using "apt install", e.g "apt install git".

If you have files you'd like to access from the container, you can link them in using the docker "-v" option. By default we link the docker socket using this option ("-v /var/run/docker.sock:/var/run/docker.sock"), but you can link any number of directories or files in this manner. For example, if you would like the contents of the "/tmp" directory on your local machine to be available under "/temp" in the docker image, you would add the following option to your "docker run" command: "-v /tmp:/temp", for a final command of:

If you're an advanced user and you'd like to create your own version of the aws-setup image with certain software preinstalled, you can request us for access to the aws-setup repository, which contains the scripts and Dockerfile we use to set up the docker image. You can also build your own image using our aws-setup image as a base.

When you enter the docker image, you will be in /home/awsuser. There should be two directories in front of you, aws-setup and awsdock. We start off by going into the aws-setup directory and configuring our AWS credentials. (This needs to be done every time you log in to the container)

You'll now be prompted to enter your AWS access key ID & AWS secret access key. If you already know what these are you can enter them and move on. If you don't know what your AWS secret key and access key are, follow this tutorial: https://aws.amazon.com/blogs/security/wheres-my-secret-access-key/. Make sure to save your keys somewhere safe that you will remember!!

Next, you'll be prompted on which AWS region you would like to use. If this is your first environment, set the region to us-east-1. Our lab's molecule data S3 bucket (zinc3d) is also located in this region, so this is the most economical region to run docking jobs in, due to the cost of moving data between AWS regions. (see diagram)

The last prompt sets the preferred output format- feel free to leave this blank, or set it to "json".

An S3 bucket is a virtual hard drive that your AWS resources can access from anywhere. You will need to create one on your account prior to creating your AWS environment. Follow the amazon tutorial on how to do this: https://docs.aws.amazon.com/AmazonS3/latest/userguide/create-bucket-overview.html

The quickstart guide will show you how to create an AWS environment in us-east-1, so it is best to create your S3 bucket in this region.

It is best to have a dedicated S3 bucket for each region you create an environment for, due to the cost of inter-region data transfer. 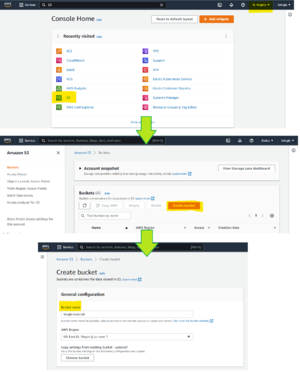 Diagram explaining how to create an S3 bucket. Note the region- N.Virginia aka us-east-1. This is the optimal region for running docking.

If it is your first time setting up an environment on your AWS account, you will need to run initialize-aws-batch.bash. This script only needs to be run once per account.

You should see this script spit out a bunch of JSON text. If you accidentally run this script when it has already been run before, you may see a bunch of errors along the lines of: "Service role name <blank> has been taken in this account". Don't worry about these, they don't mean anything.

The quickstart configuration will name your environment "dockenv-us-east-1". This name serves as the unique identifier for this environment, you'll refer to it later when submitting jobs. If you try to create an environment that already exists with the same name, the script will update the existing environment instead of creating a new one.

If you would like to set up an environment with a different name or based in a region other than us-east-1, you can use aws-setup-configs/awsdock.config instead.

Attach the bucket you created to the environment. Don't qualify this with the s3:// path, just the plain name.

Set MAX_CPUS for your environment to desired value. This parameter refers to the maximum number of jobs that can be run in parallel. You should set this at or below the suggested value- this value is derived from the AWS imposed resource limit. You can learn more about resource limits and how to increase them at this page: Docking_Submission_On_AWS#Resource_Limits

Set BID_PERCENTAGE for your environment to desired value. See section below for more explanation of this parameter, it can potentially save you money. If you're not sure, keep the default.

In order to save money, our AWS batch environment uses the "spot" allocation strategy, which allows us to bid on compute resources at a discount.